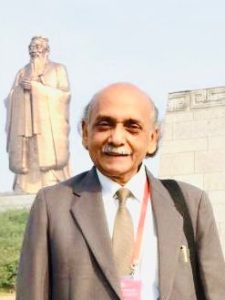 Ash Narain Roy is a Ph.D in International Studies from Jawaharlal Nehru University, Delhi. He spent more than four years at El Colegio de Mexico, Mexico City, as visiting research scholar in the early 1980s. He worked with Hindustan Times as Assistant Editor from 1990 to 2001. In 1997 Roy was sent by the UN to Cairo and Amman as member of the Fact-Finding News Mission on the question of Palestine.

He has published several research articles in national and international journals and presented dozens of papers in international seminars and conferences on democracy, local government, federalism, globalization and Indian foreign policy. He has given special lectures at China’s Tsinghua, Nankai, Shandong, Sichuan, Wuhan and Tongji universities. He has been involved with the Forum of Federation’s federalism projects in Mexico, Yemen, Ethiopia and Nepal.

Roy was a member of the international team to observe the Sri Lankan parliamentary elections in August 2015. Roy is member of the Advisory Board of several universities and think tanks. He has reported from India for Latin American services of BBC Mundo and Radio France Internationale and contributed regularly to Mexican newspapers. He is a columnist for Modern Diplomacy journal and The Statesman newspaper.

He has authored/edited several books including Development, Decentralisation and Democracy published in 2015 by Orient BlackSwan. He is currently Director, Institute of Social Sciences, New Delhi.